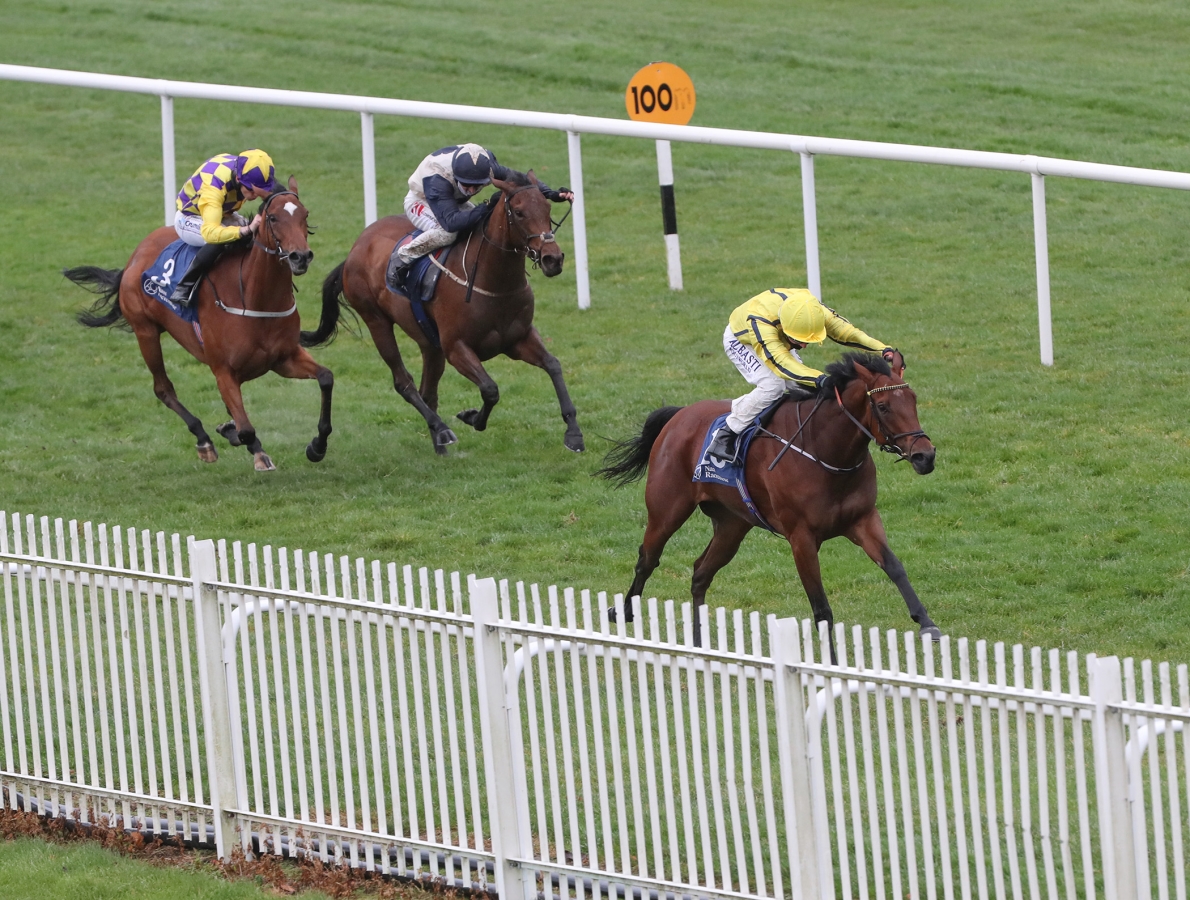 With Thanks Romps to Gr.3 Victory at Naas Racecourse

Comfortable Gr.3 Win for With Thanks at Naas

The feature race on the Flat at Naas Racecourse on Sunday was the Irish Stallion Farms EBF Athasi Stakes Gr.3 at Naas, usually held at the Curragh in May but due to current Covid-19 circumstances it was rescheduled to yesterday’s Naas card. It was won in terrific fashion by the William Haggas trained British raider With Thanks. The lightly-raced three-year-old daughter of Camacho broke well and was kept wide by Chris Hayes as Silk Forest, Darkest and Hidden Sky all went forward. Rounding the turn and with three furlongs to run, With Thanks was still in cruise control, just needing hands and heels encouragement from Chris Hayes as she quickened clear of her rivals and ran on score impressively by five lengths. Silk Forest kept on for second, a half-length ahead of Soul Search in third.

Newmarket-based trainer Haggas added over the phone: “She won easily. Chris gave her a lovely ride and she loved the ground.

“It was important to get Group 3 status for a filly like her and I think she could step up in grade next spring.”

“I don’t know if she stays in training, we were going to make that decision after today – it will be up to Sheikh Rashid. We’ll decide in the next week or so but she won’t run again this year as that is job done.

“It’s (travelling) just not an easy thing to do at the moment as you are out of control and I’m very grateful to Richard Brabazon who took her over yesterday morning and took her to Naas for us.

A winner on her sole start at two, a seven-furlong Newmarket novice, With Thanks was not seen again until just being denied by a short head in a six-furlong Thirsk novice in July. She then scored at Catterick back over seven by in excess of six lengths and was last seen finishing second to Onassis in the Listed October Fillies’ Stakes at Goodwood.

Bred by Mrs E Thompson, With Thanks is also a €100,000 Tattersalls Ireland Goresbridge Breeze-Up Sale purchase by Blanford Bloodstock, she is out of the unraced Kheleyf mare Thanks, a half-sister to the triple Listed winner and dual Gr.3 placed Briviesca; dam of the Gr.1 Prix de l’Opéra heroine Villa Marina. The third dam is the Gr.3 winner and Gr.1 Yorkshire Oaks runner-up Kiliniski.

Camacho has enjoyed another fine season on the track in 2020, the sire of French 1,000 Guineas heroine Teppal and Queen Mary victress Signora Cabello will stand for a fee of €5,000 in 2021.