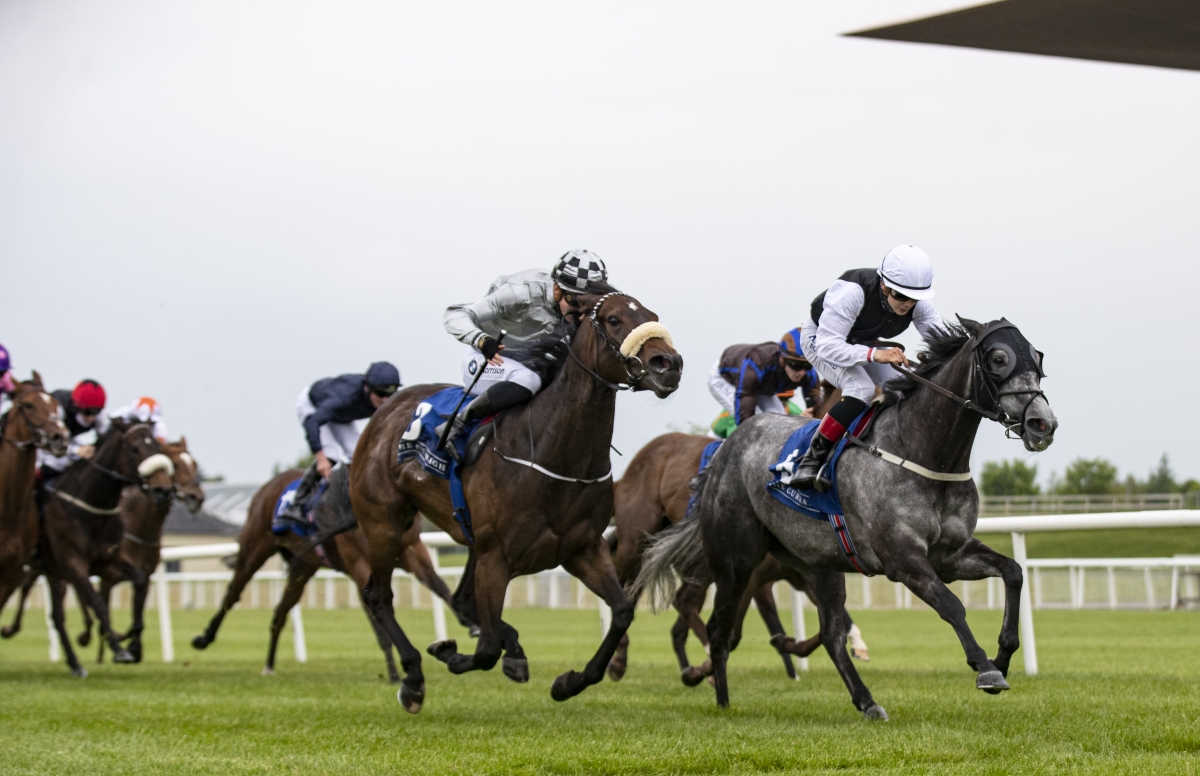 It was a fruitful evening for Dark Angel when TDN rising star Dr Zempf brought up the first leg of a quick-fire treble when scoring in very stylish fashion on debut at The Curragh on Wednesday when beating a previous winner. Sent off the 5-2 second favourite for the six-furlong Irish Stallion Farms EBF contest, the Ger Lyons-trained grey who cost 420,000gns at Tattersalls October Book 1 travelled with distinct ease in rear under stable jockey Colin Keane with the pace hot throughout the early stages. Cruising between rivals to join the favourite Elliptic a furlong out, the son of the Gr.3 Prix Eclipse winner Souvenir Delondres drew away to inflict an impressive 2 1/4-length defeat on that filly who had been such a taking winner on debut at Tipperary in April. The experienced Joseph O’Brien-trained Hadman was third, a further 1 1/2 lengths behind the winner who is the third TDN Rising Star for his sire.

Colin Keane said, “He looks to be a nice horse and we were hoping he’d do something like that. He was very professional and very relaxed and I was struggling to pull him up after the line, which is usually a good sign. They went good and hard and it was all hands and heels from a furlong from home. I just like the performance in general. He had shown plenty at home, to be fair, and the boss has been patient with him, stopping and starting, but the horse was getting bored and so we decided to run him. He is very relaxed and I’d say that will sharpen him up a good bit as he’s so quiet”

Shane Lyons, assistant to Ger, added, “He’s a lovely horse and is after doing that very well. He took it in very well beforehand and during the race he was very professional. We’ll take him home and see how he comes out of the race. He will improve, as
today was his first day seeing grass. Most likely the next race will be the Gr.2 Railway Stakes, the Siskin route”

Shortly after across the water at Kempton Park Yeomanstown bred Sunstrike broke her maiden at the second time of asking, the daughter of Dark Angel was slowly away and raced towards the rear before being switched left inside the final furlong and running on well to win under Champion Jockey Oisin Murphy in the Colors of Qatar Racing for John and Thady Gosden. She is the third winner out of Extricate making her a full-sister to Listed winner Dark Liberty and a half-sister to Queen Of Love, who also scored in Listed company. Extricate is a half-sister to Scandinavian Gr.3 winner Entangle and to the dam of Miss Work Of Art, who took the spoils in the Listed Shirocco Stakes. Extricate has a yearling colt by first season sire El Kabeir.

Bringing up the final leg was Sonaiyla, purchased by Moyglare Stud Farm for 900,000gns at the Tattersalls December Mares Sale, Sonaiyla already had serious residual value but a win in Wednesday’s Gr.3 Qatar Racing and Equestrian Club Ballyogan Stakes only served to strengthen the view that it was money well spent by the esteemed operation. Successful in the Listed Sweet Mimosa Stakes and third in the Gr.1 Flying Five Stakes last term, the grey was staying on in encouraging fashion when third over the course-and-distance Gr.3 Greenlands Stakes last month and started as the 13-8 favourite as a result. Breaking smartly from her wide draw to tank along behind the leading trio, she was in front approaching the furlong pole and stayed game and resolute for Ronan Whelan as Romantic Proposal threatened.

Trainer Paddy Twomey was celebrating a first group success and said of the half-length winner, “She’s a great filly, she’s tough and she’s hardy. I think she’s in better form than ever this year. She missed the break the last day and did great work in the finish from an unpromising position. I’m delighted she came today and showed what she’s been showing us this spring.

I’ll have to talk to the owners, but she has won a Group 3 now so we will step up in grade. Twomey added; She’s in the Diamond Jubilee, which might not be an outrageous target. She’s Group 1-placed and the Haydock Sprint and the Flying Five are other races to consider. We’ll achieve what we can for the year and I’d say she will be covered next year. She’s won on good-to-firm and she’s won on heavy. I’d say she has great preference for this track and has never been out of the frame here”