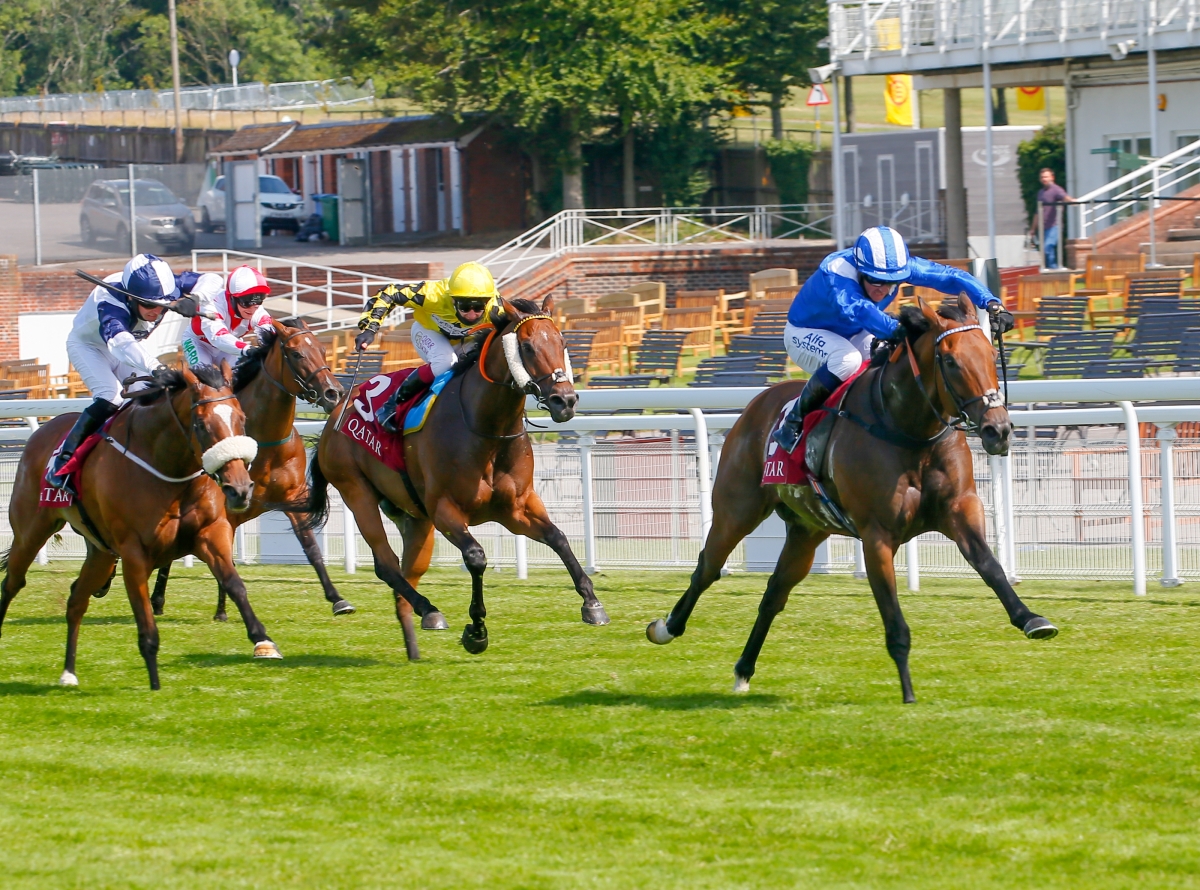 Battaash smashed the course record at Goodwood when scorching the turf to a historic fourth consecutive victory in the Gr.2 King George Qatar Stakes in the colours of Hamdan Al Maktoum.

Glorious Goodwood  has always been a place where he has always been at his blistering best and he lit up a red-hot day with another scorching display in the King George Qatar Stakes on Friday.

It was three years ago that Battaash made people stand up and take notice of his talent and powerful engine, and he has yet to disappoint in three return visits. His task this time round was straightforward as the Royal Ascot King’s Stand winner went off the 2-7 favourite and won like that in the hands of regular rider Jim Crowley, who never seemed to have a moment of worry on the horse regarded as the fastest on the planet, a claim backed up a new track record for five furlongs at Goodwood.

In an incredible display of raw speed, the Charlie Hills-trained son of Dark Angel took up the running at around the halfway point and it quickly became a race against the clock.

A previous course record held by Battaash of 56.20 seconds went down in flames as the clock stopped at 55.62 seconds, which was well below the 56.01 seconds Rudi’s Pet clocked when winning the race in 1999.

With the course bathed in sunshine and the good to firm ground drying all the time, the conditions proved optimum for a fast time and Battaash delivered it.

Hills paid tribute to Hamdan Al Maktoum’s star sprinter, who is showing no signs of slowing down.

“They went a very fast pace, but the key is not to take him back. His main advantage is mid-race where a lot of horses can become uncomfortable. He gets them out of their comfort zones.

“He’s a six-year-old now and knows more about racing than all of us. Horses need racing and it does them good. He’s got very professional now and we’ve got him in a great routine at home.

“You’ve got to give credit to the horse and for a six-year-old sprinter to have his enthusiasm every day is wonderful.”

“He has his quirks, but I’m very proud to be involved with him and my kids at home – James and Eddie – love him; he’s like a family pet. He’s not big or imposing, but he loves the attention and he’s like having a little pony in the yard.

“I think that’s the first time he’s had a Gr.1 penalty in this race, but we knew if he did what he did in the King’s Stand he’d be very hard to beat on a track that suits him.

“You could say sprinters are at their best when they get older and he’s fully matured. Mentally he’s fantastic and in a really good spot. He’s been moving fantastically on the gallops. He’s done only two swingeing canters on the gallops, but one of them was arguably the best I’ve seen him do.”

Led up by devoted groom Bob Grace, a stalwart at the yard who also looked after Battaash’s sire Dark Angel for Barry Hills, Battaash is now booked for York’s Coolmore Nunthorpe Stakes, a race which he won in devastating fashion last year. Hills has not ruled out a trip to America for the Breeders’ Cup, but does not seem in a hurry to change what has worked well for the turbo-charged speedster.

“York will certainly be the plan and it’s good timing from here,” he added. “America would be very exciting, but we’ll speak to Sheikh Hamdan and the team. It could depend on France if the ground was soft for the Abbaye.”