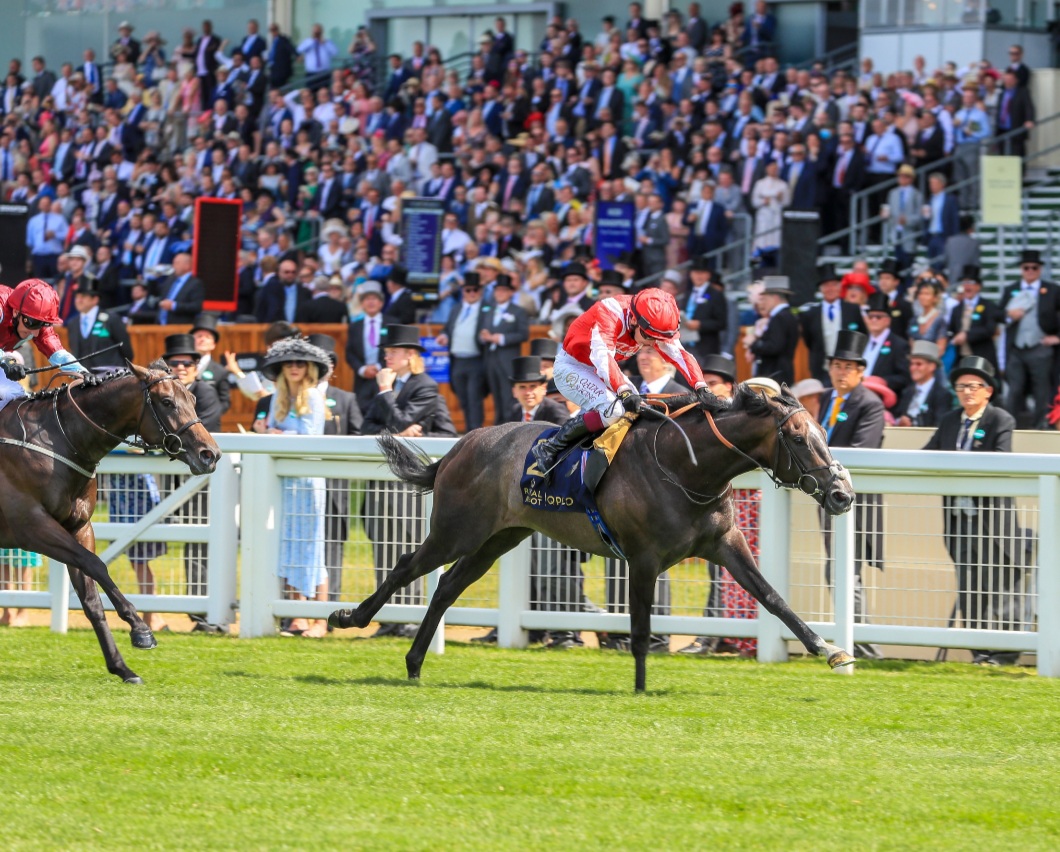 Victorious over five furlongs on his debut at Newbury, despite fluffing the start, the Andrew Balding trained Berkshire Shadow looked sure to be suited by an extra furlong – and so it proved. Leaving it late when scoring on debut at Newbury in April, the grey was again one of the last on the scene as he stormed down the rail to land the Gr.2 Coventry Stakes on the opening day of Royal Ascot. A touch slowly away drawn closest to the stand’s side, the son of Dark Angel was keen initially before settling for Champion jockey Oisin Murphy towards the back with the pace strong. Delivered to reel in Vintage Clarets with half a furlong remaining, the smart juvenile asserted to score by a lenght and a quarter from Eldrickjones who snuck a neck ahead of Vintage Clarets at the line to claim the runner up position. Berkshire Shadow was bred by Chevley Park Stud out juvenile winner Angel Vision and is unbeaten in both his lifetime starts and looks a very exciting horse for connections. Berkshire Shadow is the 71st individual stakes winner for his sire Dark Angel.

Owner Paul Spickett said: “It was special, just like at Newbury Oisin wasn’t flustered and took his time.

“To see him come home like that was quite special.

“As the years go by I’m getting more careful about what I think as I used to think every winner was going to go on and win everything, but I did think he was special to do what he did at Newbury and we were hopeful coming here.

“I had my first Royal Ascot runners last year and we were all dressed up at home with nowhere to go, we were second in the Queen’s Vase with Berkshire Rocco and that was amazing, but to have a winner is astounding.

“We backed him at 22-1 so we’ll be able to buy some cheap champagne later.”

Murphy said: “This is a special horse, he was bought inexpensively by Andrew and his mother and he’s a star.

“That was an incredible performance on his second start. To look at, he’s big and immature

“He’s got a very good future – and look what he’s just done at Royal Ascot.

“He’s done incredibly well, what a massive result for Kingsclere!”