Yeomanstown Stud are delighted to announce the addition of GUTAIFAN (IRE) to their stallion roster. The dual Group 2 winner will join his sire DARK ANGEL and CAMACHO at the Kildare based Farm.

GUTAIFAN, a tough high class two year old won the Gr2 Prix Robert Papin at Maisons-Laffitte (beating the subsequent Gimcrack winner) before running a close second to Shalaa in the Gr1 Prix Morny. He followed these runs with a scorching win in the Gr2 Flying Childers Stakes, in a track record time.

The striking grey shares many of the same attributes as his sire DARK ANGEL, winning four times over five and six furlongs on all types of ground from good/firm to soft and offers the breeder a chance to breed to a precocious and high-class racehorse, who is the top rated two year old son of leading sire Dark Angel. Commenting on the latest addition, Gay O’Callaghan says “we are excited to have acquired GUTAIFAN, he’s a great looking horse with tremendous action and a high class two year old. Precocious, tough and sound, he reminds me a lot of his father.” 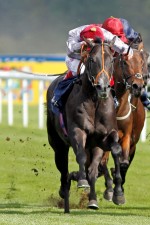