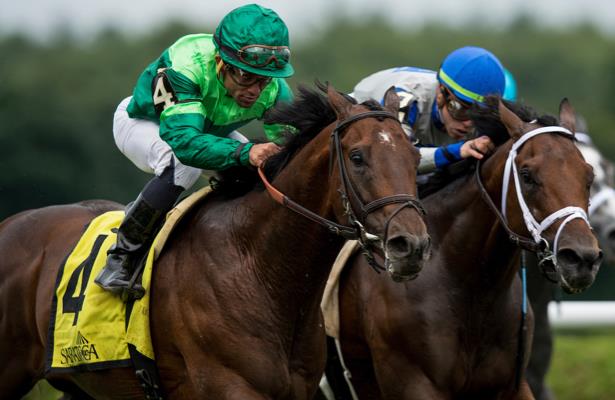 Peter Brant’s Raging Bull the 5-year-old son of Dark Angel wasted no time on May 25 and ran down his competition to win the $302,500 Shoemaker Mile Stakes (Gr.1) at Santa Anita Park.

One of the first grade 1 races on the calendar since the loosening of Covid-19 restrictions in California, the Shoemaker drew an impressive field of 10 older horses that were more than ready for a return to action.

War of Will, who had hugged the rail along the backstretch, was angled out into the two path exiting the second turn and briefly stuck his head in front. But the lead was short lived as Raging Bull, who had saved ground off the pace in eighth through much of the race, drifted out four wide on the turn, and rallied to take the lead.

Ahead by a length at the top of the stretch, jockey Joel Rosario urged Raging Bull forward all the while guiding him toward the inside. Raging Bull responded in kind and kicked away clear of his rivals. With no traffic to slow his momentum, he crossed the line 2 1/4 lengths in front in a final time of 1:32.73.

“He broke well and it looked like there was a good pace, he was very controlled. He just came with his run like he does all the time,” said Rosario. “He put in a nice run. It is beautiful. It’s nice to be back here and be back in action.”

Raging Bull’s was impressive at 3, when he took the National Museum of Racing Hall of Fame Stakes (Gr.3), Saranac Stakes (Gr.2), and Hollywood Derby (Gr.1). He also hit the board with three placings in the Manhattan Stakes (Gr.1), Fourstardave Handicap (Gr.1), and Ricoh Woodbine Mile (Gr.1) respectively.

Bred in France by Dayton Investments Limited out of the Mr. Greeley mare Rosa Bonheur, Raging Bull was purchased for €90,000 by E. Colombo Agency from The Castlebridge Consignment at the Goffs Orby Yearling Sale. He holds an outstanding race record from 13 starts and Monday’s victory bumped him to millionaire status with $1,100,750 in earnings.

Raging Bull is the second progeny of Gr.1 producing sire Dark Angel to win the Gr.1 Shoemaker Mile in the past three renewals of the race following Hunt back in 2018.