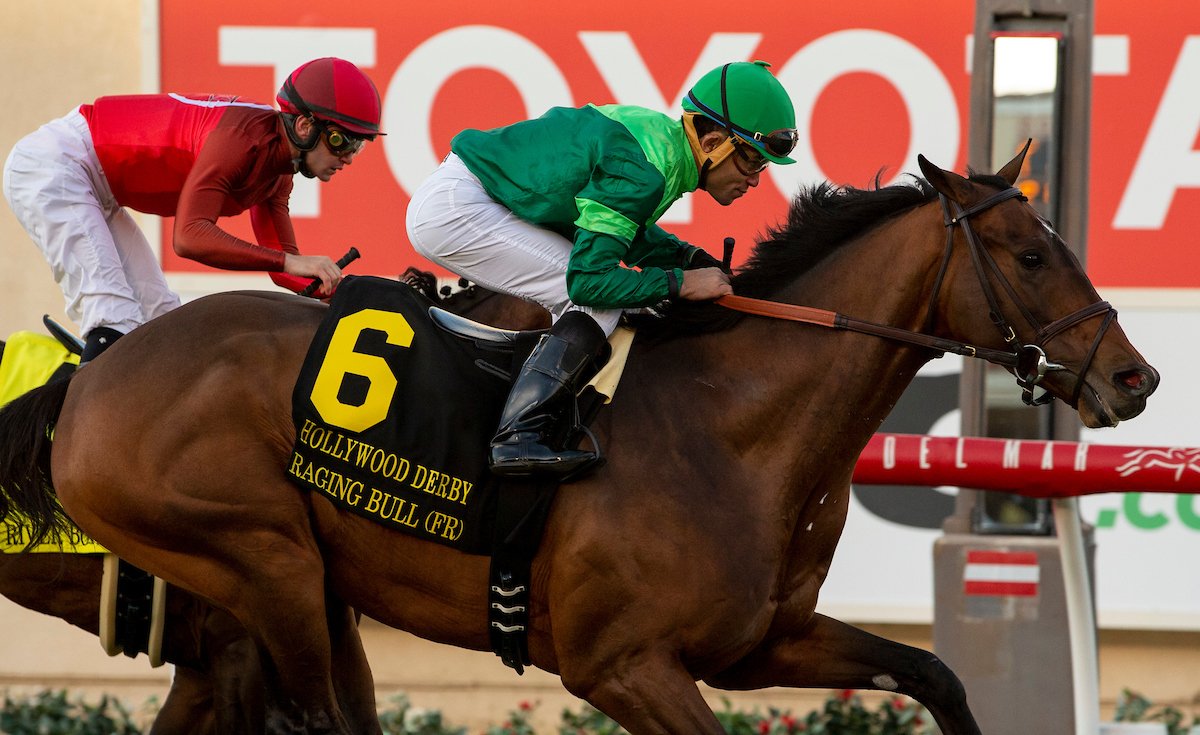 By Andrew Caulfield for TDN

The concept of a stallion covering his first mares as a 3-year-old is nothing new in the U.S, where the more notable examples include Raise a Native, Hail To Reason, Graustark, Saratoga Six and Malibu Moon. However, each of these went into premature retirement because of injury, unlike a spate of fast European horses who have been retired at the end of their juvenile careers despite having no soundness problems.

An exception to this was the champion 1999 2-year-old Fasliyev, who fractured a pastern. He recovered to sire a first crop of 112 foals, including five group winners, but never replicated that success. Next came Holy Roman Emperor, one of the best juveniles of 2006 who was unexpectedly added to the Coolmore team when another son of Danehill, the G1 2,000 Guineas winner George Washington, ran into severe fertility problems. Holy Roman Emperor has since carved out a solid career, with the GI Sword Dancer S. winner Glorious Empire being one of three 2018 Group 1 winners by him.

The list also features the G1 Middle Park S. winners The Last Lion and Dark Angel (by Acclamation (GB), as well as Dark Angel’s two-time Group 2 winner Gutaifan. Then there’s Lilbourne Lad and Mehmas, a pair of Group 2 winners by Acclamation (GB), Green Desert’s Group 2-winning grandsons Zebedee and Approve, and yet another Group 2 winner in Sir Prancealot, who this year has enjoyed graded stakes success in the States with Beau Recall and Madam Dancealot. Two other recent additions to the list are Prince of Lir, a Group 2 winner at Royal Ascot, and Kessaar, a winner this year of the G3 Sirenia S. and G2 Mill Reef S.

The argument usually put forward for the early retirement of these fast and precocious horses is that they face a very stiff task as 3-year-olds in taking on the more mature older horses in the top sprints. While the introduction of the G1 Commonwealth Cup for 3-year-olds at Royal Ascot has partly rectified the situation, keeping a sprinter in training as a 3-year-old still represents quite a gamble.

At least Dark Angel received a thorough testing in his only season on the track, if not to the same extent as Hail To Reason, whose trainer Hirsch Jacobs famously said that he “thought it better to let him wear out than rust away.” Whereas Hail To Reason raced 18 times before he broke his left fore sesamoids, Dark Angel raced nine times between April and October.

The son of Acclamation won four times, notably collecting a big prize in the £300,000 St Leger Yearling S. before going on to more important successes in the G3 Mill Reef S. and G1 Middle Park S. It was that Group 1 win in the Middle Park which would have made his tasks all the more difficult at three, as he would have had to carry a Group 1 penalty in a lot of the sprint races available to him.

The early years of Dark Angel’s stallion career suggested that breeders weren’t exactly sure what to make of him. Although he started out at €10,000, his fee was down to €7,000 by his fourth season and the number of foals in his first three crops went from 93 to 62 and then to only 39.

Fortunately, his first-crop 2-year-olds made a very fast start–fast enough to boost demand for his services in his fourth season in 2011. Since then, it has been a case of onwards and upwards, as may be judged from the fact that his fee reached €27,500 in 2014, €60,000 in 2016 and €85,000 in 2017. Still only 13, Dark Angel now has seven Group 1 winners to his credit, the latest being Raging Bull, who finished well to land the GI Hollywood Derby three days ago.

Bearing in mind that Dark Angel hasn’t had a lot of runners in the U.S., he has done well to sire three sons which have performed very creditably at Grade I level. Hunt won four graded stakes in California, headed by the GI Shoemaker Mile, while Raging Bull has now won three graded races. The third son is Fanciful Angel, who was second last year in the GI Arlington Million and GI Turf Classic. Dark Angel’s daughter Midnight Crossing is another graded winner on turf in California.

An interesting aspect of these American performers is that all four have shone over a mile and an eighth or more. One of Hunt’s victories came over 1 3/8 miles and Fanciful Angel stayed at least as well. The way Raging Bull finished at Del Mar suggests he could be a force over 1 1/4 miles as a 4-year-old (although his pedigree raises some doubts).

I am beginning to think that Dark Angel might have stayed a mile had he stayed in training as a 3-year-old, even though his connections considered him a six-furlong specialist. The belief that Dark Angel was a sprinter pure and simple had been reinforced by several of his best European winners, which feature such fast performers as Harry Angel, Battaash, Mecca’s Angel and Lethal Force. Each of these four has a lot of speed in the bottom half of his or her pedigree.

On the other hand, Midnight Crossing has a dam by the stamina-packed Sadler’s Wells and Hunt’s dam raced at up to 1 3/8 miles. Fanciful Angel’s first two dams are daughters of Groom Dancer and Gay Mecene, two horses who stayed at least 1 5/16 miles.

Raging Bull’s dam, the Mr. Greeley filly Rosa Bonheur, was a talented miler in France. Mr. Greeley, of course, was fast enough to finish second in the GI Breeders’ Cup Sprint, so it is a little surprising that Raging Bull is so well suited by a mile and an eighth.

Rosa Bonheur’s dam Rolly Poly began her career with four sprint victories as a 2-year-old in Italy and France. Her victory in the G2 Prix Robert Papin led to her being sold to Daniel Wildenstein, who eventually transferred her to Sir Henry Cecil. The filly won the G3 Fred Darling S. over seven furlongs before being transferred to the States, where she again did well. Among her three stakes successes on turf were the Las Cienegas and Senator Ken Maddy H., over 6 1/2 furlongs down the hill at Santa Anita.