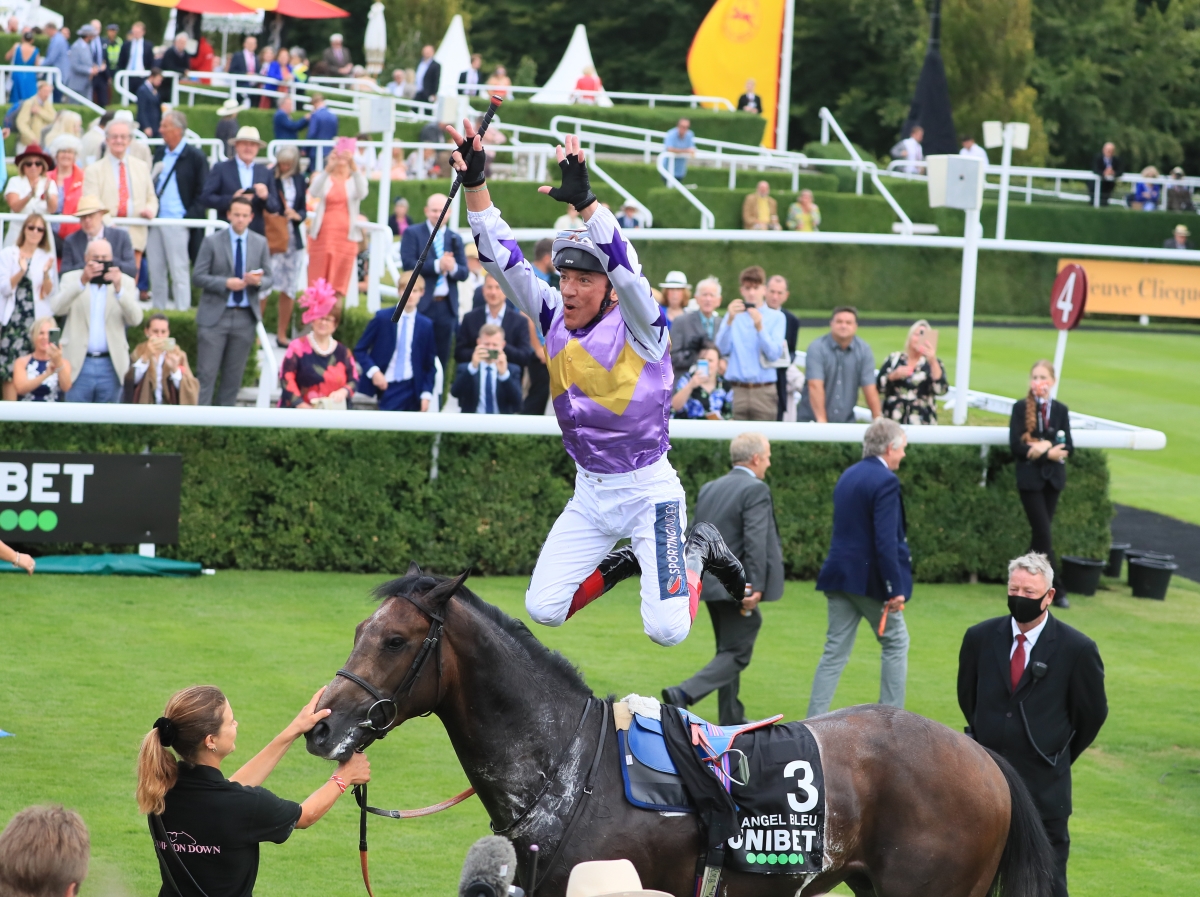 Making a quick reappearance proved no barrier to success for Angel Bleu, as Frankie Dettori steered Ralph Beckett’s colt to victory in the Gr.2 Unibet Vintage Stakes at Goodwood. Runner-up in the Listed Pat Eddery Stakes at Ascot just three days ago the exciting youngster was sent off at 100-30 to go one better in this Group 2 contest.

Angel Bleu raced enthusiastically for much of the race, but quickened up smartly in the rain-softened ground once popped the question by Dettori to score by three-quarters of a length.

Beckett and owner Marc Chan soon completed a quick-fire Group 2 double as Kinross ran out a brave winner of the Unibet Lennox Stakes under Rossa Ryan.

Beckett said: “Frankie got off him on Saturday and said ‘he’s been busy, give him a break’, so I thought we should leave him alone.

“[But] I fed him on Sunday and I looked at him sideways and thought ‘you don’t look like you’ve had a hard race to me at all’.

“I jogged him up and he bounced up the yard, [owner] Marc Chan’s racing manager called me up and said ‘why don’t we geld him now and send him to Hong Kong in the autumn, he can go there and have a good time’ – he was a little surprised when it rained and we decided to declare him!

“If we hadn’t declared and the field had fallen apart like this, I’d have been really, really cross with myself. With the rain last night I could hardly believe my luck.

“He like a bit of juice and he likes soft ground, we’ll think about the Dewhurst now I should think.”

The two-year-old was certainly bred for the seven furlong contest as he is by Dark Angel, now the sire of 41 Group winners, and 74 stakes winners, out of Cercle De La Vie, a Galileo sister to none other than Highland Reel, who claimed this prize during his own juvenile campaign in 2014 before going on to land seven top-flight races around the globe.

Angel Bleu was bred by Pan Sutong, whose colours have been carried to some notable successes by the likes of Akeed Mofeed, Gold-Fun and Giant Treasure.

Dark Angel, who currently sits in third in the British and Irish sires’ championship, was also responsible for runner-up Berkshire Shadow, who was last seen winning the Group 2 Coventry Stakes at Royal Ascot.

Of the Andrew Balding-trained Berkshire Shadow, rider Oisin Murphy said: “Off a slow pace he relaxed very well, but took a while to get going. When I gave him a kick he stayed on well and hit the line hard.