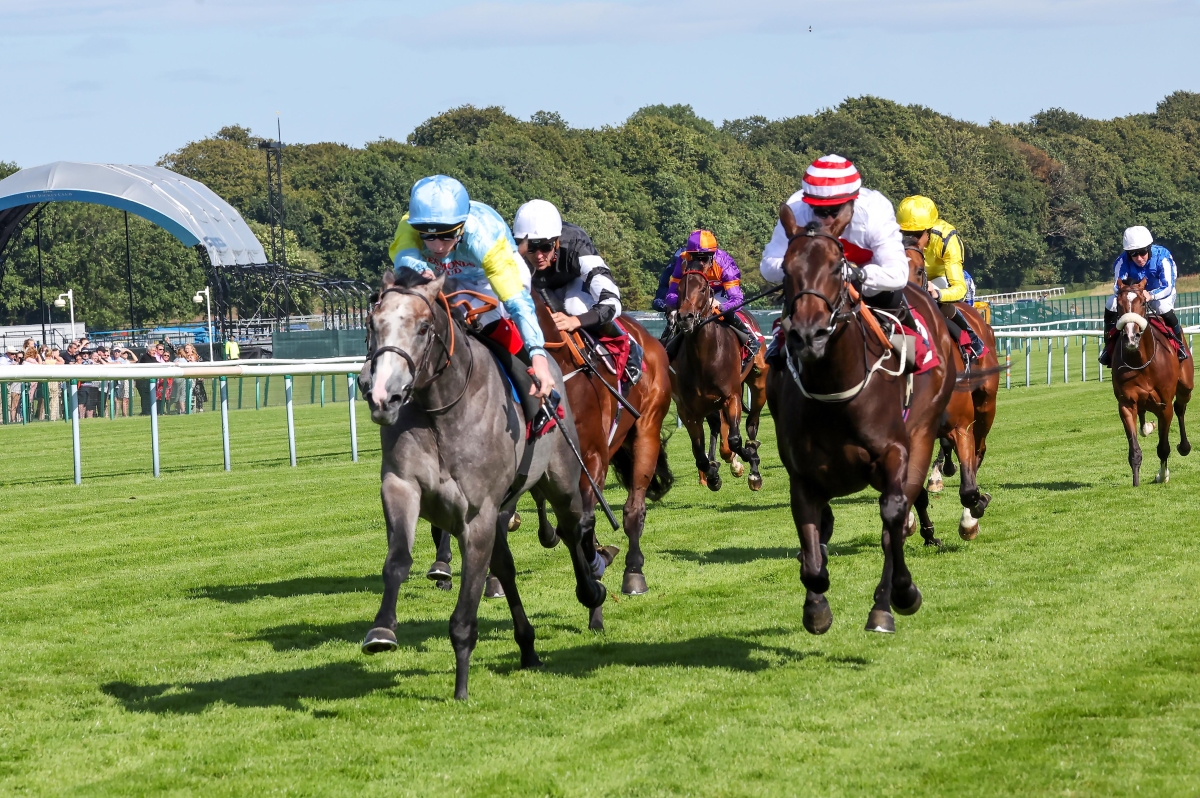 Dark Angel is enjoying another purple patch with Charyn and Alflaia providing a weekend Stakes double. The first leg was courtesy of Nurlan Bizakov’s 250,000gns Tattersalls October Book 2 yearling Charyn ran third to Roger Varian-trained stablemate Sakheer in last month’s Group 2 Mill Reef Stakes and continued his progression with a career high in Saturday’s Group 2 Criterium de Maisons-Laffitte at Chantilly. He had earlier followed up an Aug. 7 debut triumph at Haydock with a narrow defeat at Newmarket in his penultimate start later that month. The eventual winner was sent forward from an early fifth to track the leaders in third after the opening exchanges. Bustled along passing the quarter-mile marker, he tackled Eddie’s Boy entering the final furlong and kept on strongly under continued urging in the latter stages to deny that rival by a short neck after a ding-dong tussle.

“Roger Varian was quite confident the horse would run a great race and he felt the softer ground would help,” commented the winning owner’s representative Mathieu Le Forestier. “The ground was fast [at Newbury] last time, he was away slowly and didn’t get back into the race early enough. He had done that in his second start too. He broke a shade slowly again here, but Mickael [Barzalona] did well to put him under pressure straight away and he travelled well. One [furlong] out, I thought he’d win easily, but the second sure is a tough nut to crack. His season is probably finished, it looks like he will stay further and we will look forward to next year.”

The second leg of a terrific weekend Stakes double was provided by Owen Burrows who is is having a phenomenal season on the track and Alflaila continued that success when winning the Group 3 Masar Darley Stakes, the concluding contest on Dubai Future Champions Day at Newmarket on Saturday.

Since securing the first Group 1 of his career following the victory of Hukum in the DahlBury Coronation Cup at Epsom Downs in June, the Lambourn handler celebrated his eighth Pattern race winner of the year, and sixth domestically, in today’s Group 3 contest.

Despite giving Burrows “heart failure” when making a slow start from the gates the Dark Angel colt swiftly moved through the gears under Jim Crowley before mounting his challenge approaching the closing stages of the nine-furlong prize. Although Ottoman Fleet proved to be a persistent challenger the 5-2 Favourite found plenty when it mattered most before prevailing by a length and a quarter to set up a potential trip to Bahrain next month and secure his fourth victory of the year.

Burrows said: “He gave us heart failure a bit at the start but we know he does that now a bit and Jim knows him so he doesn’t panic. He lets him find his feet and he is strong at the end.

“He was going to be vulnerable if he did that and they went slow but they didn’t go very quick at York (in the Strensall Stakes) and we managed to get away with it and they went a good gallop today and the front two pulled nicely clear.

“The Strensall was a win and you’re in for Bahrain. We will see how he comes out of that and have a chat with Sheikha Hissa and see what she wants to do as he will be a nice four year old as well.

“He has a free entry in the Bahrain Trophy but we will see how he comes out in the next week to 10 days.

“We were left what we thought were the best horses. There are not many of the horses that Shadwell left with us that haven’t shown up on the track and he has contributed a nice bit as well.”

Joint-owners Linda and Peter Appleton can look forward to Azure Blue making more trips back to Newmarket next year along with lining up against Group race opposition after taking her form to new heights in the Blue Point British EBF Boadicea Stakes.

After scoring on the July Course earlier in the season the daughter of El Kabeir made it two wins from as many appearances at the Rowley Mile when bursting through late on in the six furlong affair to make her debut at Listed level a triumphant one.

Hitting top gear inside the final quarter of a mile the well-supported 9-2 joint-favourite turned on the afterburners to cross the line a length and a quarter clear of Makarova and complete a double on the card for jockey David Egan.

Linda Appleton, who owns Azure Blue with her husband Peter and Anne Elliot, said: “She was amazing. She got out quicker this time as she had been a bit slow coming out but David said she came out lovely and got into a lovely position.

“Sometimes she can hit a flat spot in the middle of her races but she didn’t this time and said she felt good and it was scary how good she felt.

“She will be better next year and that is what Michael (Dods, trainer) always said. She deserved to be here as she won three times and when you look at the form against other horses it has been good. She has got a very good mind.

“You would think so (that she would be able to hold her own in Group race company). We will just enjoy today. It is fabulous. She is a lovely horse she really is. I’m overjoyed.”