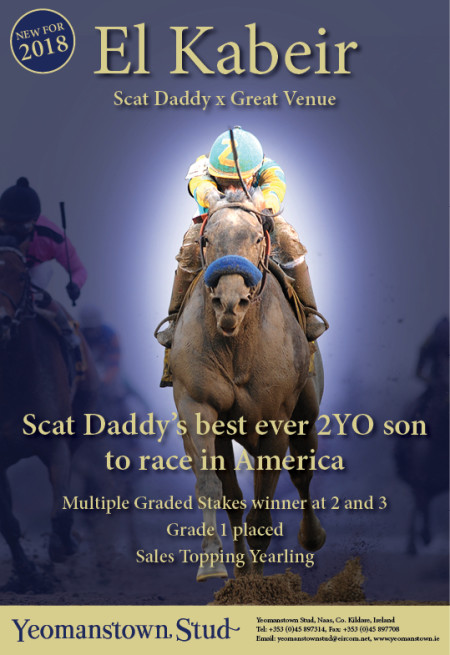 A high class performer, El KABEIR is Scat Daddy’s best and highest rated 2 year old son to race in America. A Multiple Graded Stakes winner at two and three, El Kabeir raced at the highest level, breaking his maiden by 10 lengths in Saratoga, before landing the Grade 2 Jockey Club Stakes. He then followed up in the Grade 3 Jerome Stakes before finishing 3rd in the Grade 1 Wood Memorial Stakes. Further stakes wins in the Grade 3 Gotham Stakes and City of Laurel Stakes as well as finishing 2nd in the Grade 2 Nashua Stakes, are among the highlights in an illustrious career.

The striking grey was a sales topping yearling having realised $250,000 at OBS August Yearling Sale before embarking on a successful 2 year old career and offers the breeder a chance to breed to a precocious and high-class racehorse.

El Kabeir raced in the famous turquoise and yellow colours of Zayat Stables and Ahmed Zayat described the colt as follows “El Kabeir is a magnificent looking animal. We bought him as a yearling at OBS. His talent was clear to see early on – hence we gave him such a good name El Kabeir, meaning “The Boss”. A TDN rising star – tough, versatile and extremely talented he was on the Derby Trail having won the Jockey Club and the Jerome. We had Americal Pharaoh for the Derby and ElKabeir had such natural speed, we decided to keep him to a mile. He ran in the money 13 times from 5 furlongs to a mile and sixteenth – a proper racehorse. We look forward to seeing his future progeny in the sales ring and racetrack and will be actively supporting his stallion career with mares and in the sales ring”.

Commenting on the recent acquisition Gay O’Callaghan said ‘we are delighted to have purchased El Kabeir, he is an exceptional individual with a race record to match and will offer the European breeder a further chance to avail of the precocious and exciting Scat Daddy bloodlines.’